Lakshmi and Maha Visnu's daughters were Sundaravalli and Amirtavalli born out of the tears of joy of Narayana during his incarnation as Trivikrama (Lakshmi was in Heart of Lord). They both wanted to have a husband who will never get angry with them. Sundaravalli and Amirtavalli pray to their father Vishnu for the boon and Vishnu directed them to do penance in order to marry Lord Murugan. 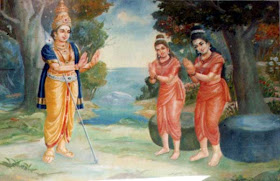 When Lord Subrahmanya was staying at Kanda Verpu, the two daughters of Lord Maha Vishnu, Amritavalli and Sundaravalli, who cherished the desire of becoming the consorts of Subrahmanya, went to Sanavana Poigai and commenced austere penance to fulfil their desires. Pleased with their prayer and worship, Lord Subrahmanya appeared before them and told -He said that Amirtavalli would be born as Tevayanai the daughter of Indra and Sundaravalli would be born to Veddas as Valli and then he would marry them both in next life.

Amritavalli: "You will be brought up by Indra as his daughter and I shall marry you in due course.
Amritavalli took the form of a female child and went to Mount Meru the abode of Indra, and told him: "I am the daughter of Mahavishnu and the responsibility of looking after me has been entrusted to you.' On hearing this, Indra became very happy and directed Airavatam, his white elephant, to take care of the child.

The elephant with all love brought her up and affection and she attained the age of marriage in course of time. Hence she came to be known as Devayanai, one who was brought up by the heavenly elephant of Indra (yanai means elephant). The marriage took place at Tirupparankunram, after the victory of Subrahmanya over Surapadma.

"Her younger sister Sundaravalli was also graced with a similar blessing. She was born to Sage Sivamuni and brought up by Nambi, the headman of hunters. Later Lord Murugan wooed and wedded the hunter's daughter Valli Amma (Sundara Valli). 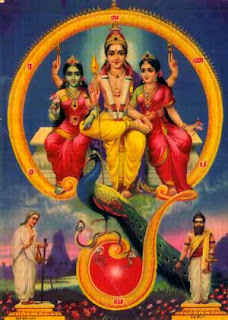 Then all three went to live happily at Tiruttani where they remain to this day.

Also Murugan's two consorts are the daughter of a humble chieftain and the other daughter of Indra, the King of the Gods. He loves both of them equally. This is just to show that god does not make any distinction between the humble folk and the elite.